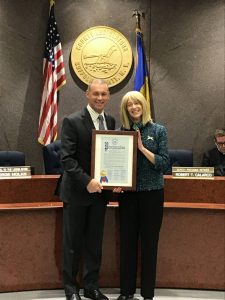 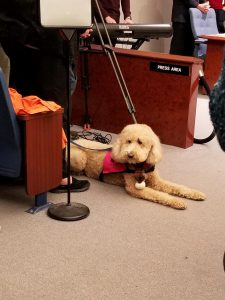 Ozzie Huber Listens to the Presentation

Among the Suffolk County Dog Parks LI-DOG has helped create are:

These dog parks are the result of legislation passed in 2007, which Leg. Stern sponsored and with whom LI-DOG worked closely, as well as LI-DOG’s work with other elected officials. Leg. Stern’s groundbreaking 2007 legislation directed the Suffolk Parks Commissioner to identify at least five parks where dog parks could be created.

“Today there are dozens of dog parks throughout Suffolk County that would not exist were it not for the precedent set by Steve’s legislation,” Ginny said in her remarks thanking Leg. Stern. “On behalf of Suffolk’s dog owners and their dogs, I want to thank Leg. Stern and let him know how grateful we are for the groundbreaking legislation he sponsored in 2007.”

“Dog parks may seem like a simple thing,” said Leg. Stern, “but if you’re a dog owner and you like spending time outdoors with your dog and other members of the community who share that love for being outdoors with our best friends, you know how important dog parks are. So with Ginny’s help and the help of so many who are active in LI-DOG, one of my first legislative initiatives was establishing the first dog parks in Suffolk County parks,” said Leg. Stern. “Today, these dog parks are thriving, they bring community members together and they have a great impact on our quality of life,” Leg. Stern noted. 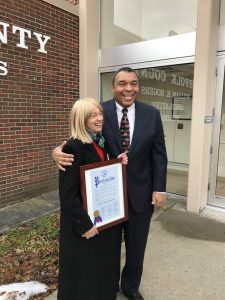 As LI-DOG’s representative on the Huntington Greenway Trails Citizens Advisory Committee, Ginny more recently worked on the committee’s recommendation to adopt uniform park standards for leashed dogs in Huntington Town Parks. The recommendation was designed to align Town parks policy with Suffolk County, which allows leashed dogs throughout its 48,000-acre park system. In August 2017, the Huntington Town Board unanimously passed the resolution that opened virtually all Town parks to leashed dogs.

Ginny also thanked her LI-DOG colleagues for their significant help in making Long Island parks more dog-friendly. “As is true with any accomplishment, I share this with my LI-DOG colleagues—Barbara Buscareno, Ed and Arlyne McMullin, and Pam Schmidlin who worked on the Suffolk dog parks plus my Nassau colleagues Christine Laubis, Peggy Heijmen, Marie Amsterdam, Joann Garguola and Liz Haban who have taken Suffolk’s success and expanded it into Nassau County. “These dog parks and dog-friendly park policies are great examples of local democracy in action,” said Ginny.

LI-DOG continues to work to increase access to public parks and beaches for Long Island dog owners and their dogs. Current campaigns are focused on Nassau County parks, Town of Hempstead parks, and beaches on Long Island.

The organization reaches thousands of Long Island dog owners every week through its website, emails, and Facebook and Meetup groups.