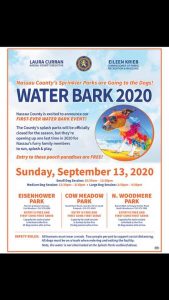 Nassau County’s Sprinkler Parks are going to the dogs! The County’s splash parks may be closed for the season, but they’re opening one last time in 2020 for Nassau’s furry family members to run, splash and play! Spray parks located in Eisenhower Park in E. Meadow; Cow Meadow Park in Freeport; and North Woodmere Park in N. Woodmere are participating in Nassau County’s first-ever Water Bark event.

Entry is free and first-come, first-serve. Capacity for each session is limited to the first 25 dog owners who arrive.

In order to support County Executive Laura Curran’s efforts to promote animal adoption, a mobile adoption unit from North Shore Animal League will be on hand for dog parents who are thinking of adding another canine family member to their pack!

Safety Measures: Please be aware that all humans must wear a mask. To facilitate social distancing there is a limit of two people per pet. All dogs must be on leash when entering and exiting the splash park.

For more information, check out the Nassau County Dept. of Parks on Facebook. 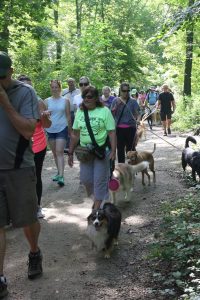 
Presentation at Barkfest 2016 thanks the County Executive for following through on his 2013 commitment to LI-DOG to increase access to the County’s 6,000 acres of public parkland to dog owners and their dogs. To read about the presentation and the parks now available for on-leash dog walking, go to LI-DOG Thanks Nassau County Exec. 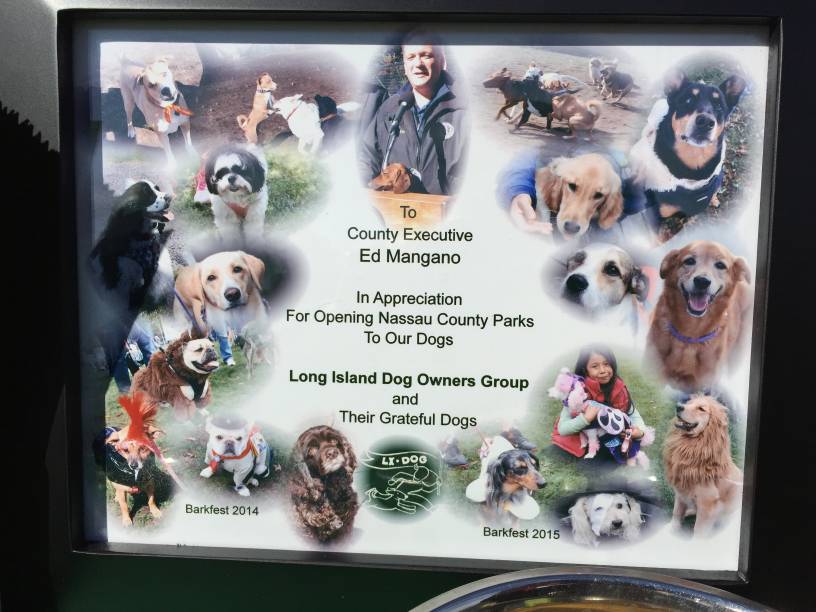 The parks and/or trails where people can now walk their leashed dogs are: Christopher Morley Park in Roslyn, Silver Lake Park in Baldwin, Massapequa Preserve (the Fire Rd. Trail) in Massapequa, Mill Pond Park in Bellmore/Wantagh, and Park Blvd. East in Eisenhower Park, E. Meadow. To see the full list of dog-friendly parks plus maps, go to On-Leash Dog Walking Parks and Trails.

Please note: We are working with the Nassau Parks Dept. and the Office of the County Executive to get the No Dogs Allowed signs in several of these parks replaced. Please be assured that you can walk your dog on-leash on these trails in these parks despite the outdated signs.

Let the County Executive know how much you appreciate being able to walk your dog in Nassau County parks! Go to Nassau Now online or call  516-MANGANO. Sending emails and calling to show support will help us get MORE access to parks and beaches in the future. 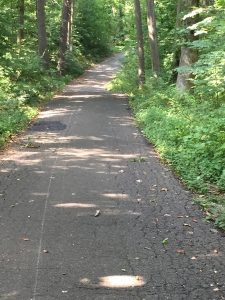