Construction Started Late Last Fall and Should  Be Done This Spring 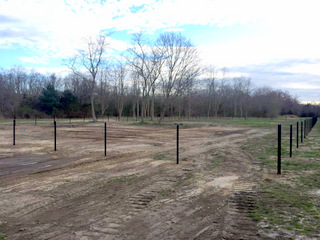 A large, new dog park is under construction at Suffolk County’s popular Gardiner Park in Bay Shore. The dog park is scheduled to open in the spring 2019.  The site for the off-leash area, in the northwest corner of Gardiner Park, has been prepared and in an effort to provide shade during the summer and a more natural setting, many of the existing trees have been left in place, according to Suffolk Parks Commissioner Phil Berdolt.  The dog park will have three sections: a 80′ x 300′ small dog area; a 120′ x 300′ large dog area and a 40′ x 100′ agility training area.  The provision of a agility training area is a first for a Suffolk County dog park, the Parks Commissioner noted. Each of the sections will be completely fenced by 4′ high black vinyl coated chain link fence.  In addition, two watering locations have been installed. The total dog recreation site will cover 64,000 square feet or about one and one-half acres.

The funds for the new dog park come from a $100,000 grant obtained by New York State Sen. Phil Boyle. Former Suffolk Legislator (now NYS Senator) Monica Martinez sponsored the resolution in the Suffolk Legislature to accept the grant and authorize the dog park.

In order to make sure Gardiner Park works for all park patrons, please keep your dogs leashed unless you are in the dog park itself.  Also, as always, please remember to clean up after your dog. 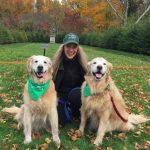 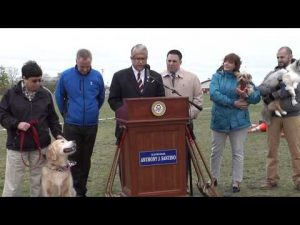 The Town of Hempstead is getting its first dog park! On May 5th, 2016, Hempstead Town Supervisor Anthony Santino announced that a new dog park is underway at the south end of Newbridge Road Park in Bellmore. The announcement follows a commitment made by candidate Santino in Oct. 2015 to LI-DOG in which he stated that he was a strong advocate for animals and would work to create a dog park for Hempstead residents and their dogs. (Read Santino’s Oct. 2015 statement.) The new dog park represents the first time dogs will be allowed in a Town of Hempstead park!

Amenities at this new 14,025-sq-ft park will be welcomed by both canines and their human companions. Dogs will enjoy a large, fenced-in area surfaced with paw-friendly synthetic turf and furnished with ramps, weave poles and hurdles. Their families will have picnic tables, benches, a shaded area and water fountains as well. To ensure a relaxed and safe experience for everyone, the park will be separated into large and small dog areas and surrounded by a secure, 6-ft. high chain link fence.

Construction is now underway and the dog park is expected to be up and running by late August 2016.

Marie is LI-DOG’s Hempstead Campaign Organizer and the owner and operator of the Mariedogwalker brand, advocating for animals through information, education and daily care.

On Oct. 13, 2015, LI-DOG asked the two major candidates for Hempstead Town Supervisor—Anthony Santino and Rita Kestenbaum–for a statement on their position regarding access to Town parks. Right now, dog owners and their dogs are denied access to ALL 1,400 acres of Hempstead public parkland. This is not acceptable. Walking your dog on-leash in a public park is a common activity in parks around the country, and communities all over Long Island have created dog parks so dog owners can exercise and socialize their dogs in secure off-leash areas.

We are happy to report that both candidates responded positively to our request. Not only did they give us statements, but they endorse more access to Town of Hempstead parks—either on-leash access to the parks or dedicated dog parks! The candidates emphasize different dog-related initiatives, so make sure to read both statements thoroughly. Then, on Tues., Nov. 3rd, make sure to vote for Hempstead Town Supervisor! You can help make Hempstead a more dog-friendly town!

Thank you for e-mailing me concerning Hempstead Town parks and canines’ access to these government facilities, whether they are parks, beaches or town open space. It was good to hear from you. I always appreciate it when neighbors take the time to share their thoughts and concerns; it allows me to better represent our communities on the Hempstead Town board.

I support dog parks and will work to establish them in Town of Hempstead facilities if elected Supervisor.

I am a longtime animal and dog advocate and look forward to partnering with dog owners in the future to review proposals to make this a reality throughout Hempstead Town.

For more info, check out Santino for Supervisor on the web.

As supervisor for the Town of Hempstead, I would support permitting responsible dog owners to walk their dogs on-leash in town parks. The laws constructed by previous administrations forbidding dogs in Town Parks are obsolete, and unfair to dog owners. There should be more places for dog owners to exercise their pets besides streets and the scarce number of parks outside the Town’s control. Residents of the town pay hefty taxes for their gorgeous parks, and it is only fair dog owners enjoy them with their canine companions as well.

I would be thrilled to work with the Town Board, and any other official who has influence over this process to change the Town’s policy banning dogs from Town controlled parks. For those who may feel uncomfortable around dogs, there will be paths and trails designated for pedestrians only. And to help keep Town of Hempstead parks pristine, there will be dog-waste bag dispensers placed strategically throughout the parks.

I have gone to Town budget meetings to not only call out discrepancies in the Animal Shelter budget line, but to also demand these animals receive the proper treatment and care so that one day they can be placed in a loving home. This illustrates my dedication to animal-related issues, and being a pet owner myself, I would love nothing more than to enjoy our scenic parks with my dogs as well.

For more information, check out Rita Kestenbaum for Hempstead Town Supervisor on the web.

Thank you to both candidates for taking time from their busy campaign schedules to let everyone know how they stand on this issue that affects tens of thousands of Hempstead Town residents!