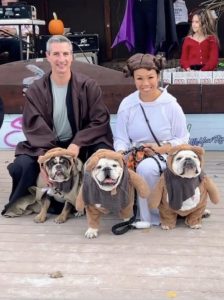 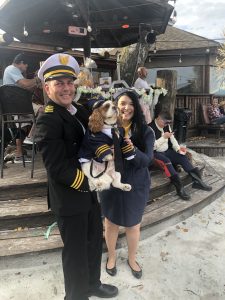 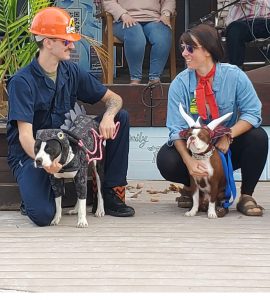 Good boys and girls performed tricks for treats and competed in close match-ups for best costume on Sunday, November 6th at Off-Key Tiki in Patchogue at the Long Island Dog Owners Group’s (LI-DOG) Howl-o-Ween Celebration.
With nearly 100 people in attendance (and almost as many four-legged party goers), the event celebrated all things wonderful about the holiday and canine companionship. “When we see dogs at an event like this, it shows that they’re an important part of people’s families and that people feel they belong in public spaces,” said LI-DOG President Ginny Munger Kahn.

As a testament to the greater Long Island community’s love of dogs, there were over 20 generous gift baskets donated for Howl-o-Ween raffles from businesses all over Nassau and Suffolk. This included an anonymous donation of a Grand Prize of a three-night getaway to Myrtle Beach at a condo.

Other notable donations included: a hand drawing of your dog by artist Alan Meschkow; his wife Gail donated a hand-knit sweater for your dog and matching hat for you;
IHOP in Oceanside donated once a month pancakes for a year, plus there were several wine donations and beautiful hand-painted wine glasses. 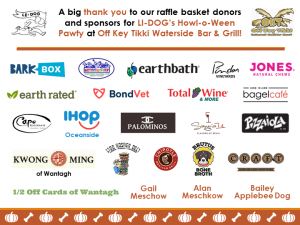 Of course, the biggest supporter of the event was Off-Key Tiki, which has been sponsoring fundraising events for LI-DOG for nearly ten years. In that time, hundreds of canines have fallen in love with the “beach” area and fire pit while surrounded by live music. The puppers generally sit and enjoy the ambiance much like being at home on the couch with the TV on. Each year, Off-Key Tiki has provided free hot dogs and hamburgers for the human attendees (much to the envy of their four-legged companions). This year, Off Key Tikki also donated gift certificates for the top three contest winners.

Music and announcements were provided by MC Mike Kaplow (himself a husky aficionado) who played a variety of music from the 40s, 50s, 60s and 70s throughout the event.

And proving what a democratic gathering Howl-o-Ween is, there were dogs of all sizes and breeds attending the party. “There was quite the diversity of small, medium, and large dogs, who were well-behaved and greeted new people and new dogs in a comfortable way,” said  Munger Kahn.

The main draw of the event though were all the adorable dogs in costume. “It was unbelievable the creativity and care people put into their costumes,” said Munger Kahn.

Three contests were held: two Costume Contests, plus a Tricks for Treat contest. 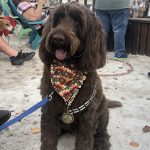 The winner of the Tricks for Treats contest was Oliver, a chocolate-colored Labradoodle, who proudly wore his 1st Place medal the rest of the event. “It was the originality and the interaction between presenter and dog we were looking for,” said Judge Alan Meschkow. “With Oliver and his presenter, you could just see how good the eye contact was and how bonded the handler and the dog were,” Meschkow said. Coming in a close second was Cosmo, a Corgi, with Bulldog Riley coming in a close third.

With 29 contestants, it was fierce competition for the two costume contests showdown–Best Pet and Best Pet/Pet Parent duo. 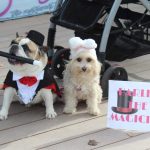 The winners of the Best Standalone Pet Costume contest were:

First Place – Harley and Cassie, the Magician and his rabbit 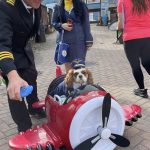 The winners of the Best Pet/Pet Parent Duo were:

First Place – Jr. Pilot Frankie with his parents Mike and Lucy, pilot and flight attendant (in a remote-controlled airplane!)

Third Place – Lexi, Phoebe and Coco as Ewoks with their parents Sherri and Nick as Leia and Obi-Wan 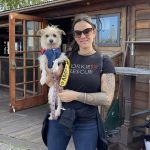 Rescue organization Yorkie911 came with several of their adoptable pups and Bond Vet, the animal hospital and veterinary services outfit, came to hand out freebies and goodies for the dogs.

More than a dozen volunteers were also on hand to set up, welcome guests, sell raffle tickets, and judge the contests.

This was LI-DOG’s most important fundraiser of the year, noted Munger Kahn. The money raised supports LI-DOG’s work to get more access to LI parks and beaches for dog owners and their dogs. Right now, LI-DOG’s main campaign is getting access to non-swimming NYS beaches.

“We want to congratulate all the winners of our raffle baskets and our contests,” said Munger Kahn. 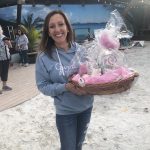 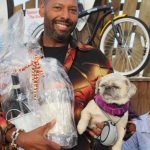 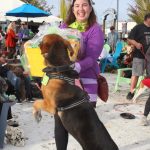 “The event was a lot of fun and we want to thank everyone, including our amazing volunteers, who joined us with their dogs and made it happen!”

To see all the photos of people and their pups enjoying our Howl-o-Ween Pawty, check out LI-DOG on Facebook and LI-DOG on Meetup. Feel free to tag yourself and your dog!

Sam Desmond is a Contributing Editor to the Long Island Advance, The Suffolk County News and several other Long Island newspapers. She can be reached at: snd.scribe@gmail.com. 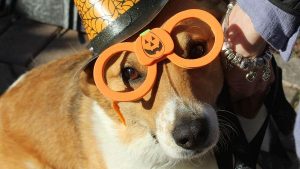 How to find us: Look for the palm trees and goblins!

Dress up your pup and yourself in your Howl-O-Ween finest and then come join us for a HOWLING GOOD time at LI-DOG’s Howl-O-Ween Pawty on the beautiful waterfront and “beach” at Off Key Tikki Bar & Grill in Patchogue! The Pawty starts at 1 p.m. on Sunday, Nov. 7th.

Your dog will get to play “Trick for Treat”, then take part in the costume parade and contest where you can compete in one of two categories – best standalone pet or best pet/parent duo. First prize winners in each category will receive a prize, graciously donated by Off Key Tikki!

We’ll also have a scary, but not too scary photo booth so you can take a memorable shot of your dog at the event and let your pup show off their inner “PupCasso” at the LI-DOG Paw Printing Booth!

You can nosh on hot dogs, generously provided by Off Key Tikki,  order food and drinks from Off Key Tikki’s new menu, or if you haven’t had enough, sample the free Howl-o-ween candy. Off-Key Tikki is also concocting drink specials to mark the occasion! 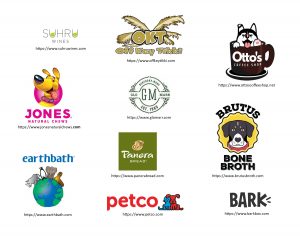 This is a fundraising event to benefit LI-DOG, so please visit the raffle tables to take a chance at winning one of the GREAT raffle  baskets generously donated by our sponsors. Thank you BarkBox, Brutus Bone Broth, EarthBath, Earth Rated, GloMarr Pet Products, Jones Natural Chews, Otto’s Coffee Shop, Panera Bread, Petco, Stew Leonards E. Meadow,  and Suhru Wines  PLUS individual donations from author Jean Derespina, artist Alan Meschkow, knit master Gail Meschkow, and Bailey Applebee Dog and his Mom!  An especially big THANK YOU to Off-Key Tikki for donating prizes, food, and their FUN space to our event! Donations support our work to increase access to public parkland and beaches for Long Island dogs owners and their pets.

Please be aware dogs must remain leashed on non-retractable leads at all times. As always, please walk you dog before entering the venue. Dogs are not permitted inside the restaurant.

To RSVP to our Howl-o-Ween  Pawty, go to:

or email us at lidog_news@yahoo.com

We look forward to seeing you and your pup at LI-DOG’s Howl-o-Ween Pawty on Nov. 7th.  Happy Howling!

Ready for a very special Howl-O-Ween event for you and your pup? Come join a rocking Halloween party and canine costume contest at the Town of North Hempstead’s Michael J. Tully Dog Park, New Hyde Park, on Saturday, October 23rd.  For details, go to Howl-o-Ween at Michael Tully Dog Park!