The town has budged $250,000 for the project, which will be fenced, includes small dog and large dog areas, and already has agility equipment donated for the project. For details on potential features and amenities and projected opening dates, go to North Hempstead Plans 1st Dog Park at Tully Park. 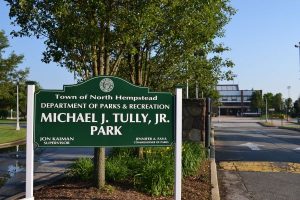 LI-DOG is very pleased to announce that the Town of North Hempstead is planning on opening a dog park at Michael J. Tully Park in New Hyde Park. At an informational meeting on October 25, Town representatives advised local dog owners and other dog park advocates that the Town had budgeted $250,000 for a dog park at Tully Park and was seeking input from the community as to the location and what amenities the park should have. It was a very productive meeting and the Town obviously did its research on what would make an effective park.

Among the topics discussed were ground cover (with artificial turf seeming to be favored) and the importance of tall enough fencing, signs prominently displaying the rules, separate areas for large and small dogs and adequate lighting since the park is open after dark. Participants also expressed a desire for water fountains, shaded areas, benches, agility equipment (which has already been donated to the Town by the Shelter Connection), and Wifi, which the park also already has.

Several locations in the park were also discussed: one area in the back of the park which is close to a recharge basin and tends to be buggy, according to the Town, one site in back of the administration building and a larger grassy area in front of the building. We expressed our opinion that the area in front of the building appears to be the most suitable, and most of the other participants seemed to agree.

The Town indicated that the timetable for the opening of the park would depend on the site chosen, since some would require more prep work, but overall, it appears that by next spring or early summer, dog owners in the Town of North Hempstead will have a new dog park to take their canine companions!

LI-DOG appreciates the efforts taken by North Hempstead to accommodate the growing community of dog owners. In Feb. 2016, the Town approved on-leash dog walking in three Town parks–Mary Jane Davies Green in Manhasset, North Hempstead Beach Park in Roslyn and Michael Tully Park. Go to North Hempstead Approves First Three Dog-Friendly Town Parks to read about the Town’s groundbreaking move. The Town has also held outdoor Doggie Pool Parties at the end of the summer season at Tully Park, which have proven very popular with dog owners and their pups.