Do you live in Port Washington, Manhasset, New Hyde Park, Carle Place, Westbury or any other town in the Town of North Hempstead? Would you like to walk your dogs in town parks instead of along busy streets and sidewalks? Then, come to the public hearing on Tues., Feb. 23d at 7:30 p.m. at Town Hall and let the town know! 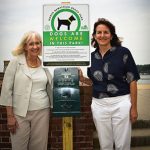 In June 2015, North Hempstead Supervisor Judi Bosworth, the Hempstead Town Board, and Parks Commissioner Jill Weber took the historic step of opening three local parks to on-leash dogs as part of a pilot program. Until then, North Hempstead, like almost all other towns on LI, banned dogs in town parks. Check out the three dog-friendly parks with your dog at:

Also, if you have not already done so and you are a Town of North Hempstead resident, take the Town’s online survey about the groundbreaking pilot program. Let Supervisor Judi Bosworth and Parks Commissioner Jill Weber know how much you, your family and many of your friends want dog-friendly local parks.