Statement Follows LI-DOG Response to Concerns about Dogs on Beaches 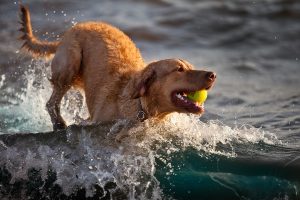 “The issue of unleashed dogs on our beaches is being reviewed by our staff in a very serious manner,” writes New York State Parks Long Island Regional Director Wayne Horsley in a June 2nd letter to LI-DOG. The letter comes in response to a lengthy communication from LI-DOG addressing concerns about dogs on beaches.

Horsley writes that the issue of dogs on beaches is a “major decision” for the NYS Office of Parks, that it is “controversial,” and that Parks is having trouble finding a location “easily adaptable” to both people and dogs. (LI-DOG is asking for access to beaches during the off-season when many beaches go largely unused.) The Regional Director concludes, “Be assured this issue is being discussed and we hope to work our way through the questions relating to this issue.”

The letter from NYS Parks comes after LI-DOG started a campaign in June 2014 to gain access to New York State beaches. Long Island is surrounded by miles of coastline, but other than on the East End, almost none of that coastline is accessible to dog owners and their dogs. Lack of access to beaches by dog owners is one of the most frequent complaints we hear about Long Island, especially from people who have moved here from other places around the country.

In September, LI-DOG asked supporters to send the Office of Parks emails and letters making the case for more access to beaches. Thank you to our supporters for your thoughtful and articulate emails and letters! NYS Deputy Regional Director George Gorman responded by laying out the concerns the Office of Parks has about dogs on beaches. In April after interviewing community leaders on the East End and gathering new data and research, LI-DOG responded to the concerns point-by-point. (Read the full letter at Letter to NYS Parks Addressing Concerns About Dogs on Beaches.) LI-DOG also renewed its plea to the Office of Parks to work with LI-DOG to update its policies so they meet the needs of this large and growing constituency—Long Island families who own dogs.

In response to the concern that people would not pick up after their dogs and beaches would have to be closed, LI-DOG said that it was not aware of any beaches on Long Island where dogs are allowed that have been closed because of their presence. The majority of dog owners these days know cleaning up after their dogs is a basic responsibility and our experience with dog parks is peer pressure works to make sure the majority of people clean up. LI-DOG noted there are always irresponsible people in parks and it’s not fair to punish the majority of responsible park goers for the irresponsible behavior of a few. LI-DOG offered to step up its Pick Up the Poop (PUP) campaign, organize Adopt-A-Poop clean ups as needed, and work with Parks to come up with appropriate signage and flyers. “It’s all about education, “said one official in the Town of Southold, which allows dogs on beaches. “Ninety-five percent of dog owners are responsible.”

In response to the concern that endangered birds could be negatively impacted, LI-DOG noted it is asking for access to beaches during the off-season when migratory and endangered birds are not present. The National Park Service provides access to Fire Island National Seashore during the off-season and even during the summer dog owners are allowed to walk their dogs on boardwalks and bayside beaches at Fire Island. The National Park Service and East End Towns, which have protocols for protecting migratory birds during the summer when dogs are allowed on beaches, provide good examples of government authorities that balance the needs of wildlife with the recreational needs of local residents who own dogs.

In response to the concern that some people are frightened by dogs and the potential for dog bites, LI-DOG responded that any on-leash or off-leash access to beaches would be clearly marked so that people who did not want to come into contact with dogs could avoid those areas or visit the vast majority of beaches that do not allow dogs. LI-DOG also noted while all dog bite incidents are traumatic, the likelihood of such incidents occurring in a public park or beach is extremely small. A New York City study in 2006 found that less than 3% of such incidents took place in a public park.

LI-DOG said it understands providing dog owners with access to beaches on Long Island represents a change in long-standing New York Parks policy. But, much has changed since current policy, which prohibits all access to NYS beaches on Long Island by dog owners and their dogs, went into effect. Today, it is difficult to explain to people why they can’t take their dogs to beaches on Long Island when this is a normal, expected activity on beaches around the country. Current NYS policy is out-of-date and draconian by today’s standards, writes LI-DOG. It’s time for the Office of Parks to work with the dog owner community to update its policies so they do a better job of addressing the needs of this large and growing constituency—people who own dogs. Forty-nine percent of American households own at least one dog, according to The American Pet Products Association.

LI-DOG appreciates the Regional Director’s serious consideration of this issue, which affects thousands of Long Island families and we look forward to continuing our discussion about increasing access to NYS parks and beaches with the Regional Director and the Office of Parks.

If you would like to let the Regional Director know what you think about allowing dogs on Long Island beaches, go to Contact Us on the NYS Parks website or write NYS Office of Parks, 625 Belmont Ave., W. Babylon, NY 11704. Remember, always, be polite.

Thank you for your continuing support!