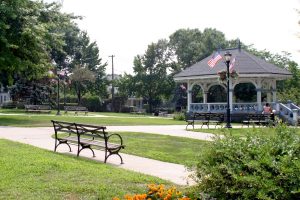 Dog owners got approval to walk their leashed dogs in three North Hempstead parks after the Town Board, led by Supervisor Judi Bosworth, unanimously approved making a pilot program begun in July 2015 permanent. The three parks where people can now walk their dogs on-leash are Michael J. Tully Park in New Hyde Park, Mary Jane Davies Green in Manhasset, and the trail at North Hempstead Beach Park in Roslyn (See park names below for Google maps to their location.) The decision came on Tues., Feb. 23rd after a public hearing in which Parks Commissioner Jill Weber presented results from the    Town’s survey on the pilot program and the Parks Dept’s own assessment of the success of the program. “The majority of comments received were very enthusiastic,” said Supervisor Bosworth, and the majority of people who spoke at the public hearing, including LI-DOG and its supporters, were in favor of the resolution.

Among the key findings of the survey, which got about 150 responses, were that 94% of the responders had had no difficulties with the on-leash program. Seventy-four percent of respondents were familiar with the program and 60% had brought their leashed dogs to one of the town’s parks, according to Weber. Moreover, 95.5% of those surveyed said they would like to see the program expanded to more town parks. Weber noted that the Parks Dept. saw no increase in dog waste in any of its parks during the pilot program and that everyone she observed at Michael J. Tully Park, where the Parks Dept. has its headquarters, had been on-leash. She noted that many people had commented they felt safer walking in parks with their dogs, that the presence of dogs will deter geese and their droppings, and that many people want to be able to exercise more with their dogs.

LI-DOG Vice President Peggy Heijmen applauded the town’s historic decision and agreed with those comments. Designating trails for dog owners in town parks will incent more people to get out and walk with their dogs, an activity public officials should encourage at every turn, she said. Until the launch of the pilot program, North Hempstead, like almost all other towns on Long Island, banned dogs in town parks. “As dog owners and dog lovers, we applaud the Supervisor, Parks Commissioner and Town Board for undertaking this refreshing initiative, which will enrich the lives of your residents and their dogs for years to come,” said Heijmen.

The Town has indicated it will consider expanding the program to other parks in the future. “People love this program,” said Supervisor Bosworth.

LI-DOG reminds its supporters to keep dogs on-leash in these new dog-friendly parks and to continue to spread the word about the importance of cleaning up after your dogs—always.

The three dog-friendly parks in North Hempstead are: