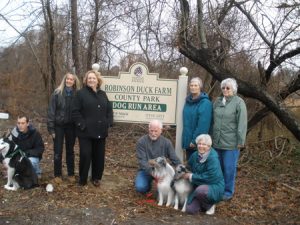 A large, new dog park is now open at the former Robinson Duck Farm on Montauk Highway in Brookhaven Hamlet. The dog park, which is located in the north central portion of a multi-acre field, currently covers 2.6 acres and is surrounded by 4-ft. high wooden-slat snow fencing. There are two DOUBLE-gated entries into the dog park off a small parking lot. Because the dog park is located adjacent to Montauk Highway, dog owners are advised to keep their dogs under control and under close supervision at all times.

As a “natural borders” dog park, the park will not have the usual amenities associated with more traditional fenced dog parks. Dog owners are expected to bring their own waste disposal bags and water. Moreover, the County is not providing trash receptacles or waste removal at this time. LI-DOG has asked the Parks Dept. to provide those services to the new dog park.

Because the new dog park is being run as a pilot program, LI-DOG expects adjustments will be made in how the new dog park operates. We are asking all our fellow dog owners to provide us and the Parks Dept. with constructive feedback on how to make the dog park successful. Email or call:

Ribbon Cutting and Inauguration of the New Dog Park 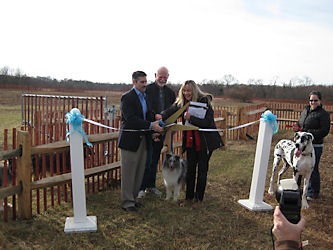 Suffolk County officials, however, estimated the cost of a dog park in Southaven County Park at more than $70,000. On December 14th, at the same time as he cut the ribbon for the new Robinson Farm Dog Park, Suffolk County Executive Steve Levy vetoed the Southaven Dog Park bill, saying that in tough economic times, the County needed to come up with an alternative. The dog park at Robinson Duck Farm with its snow fencing and minimal services fit the bill. It cost only $6,000, according to the County Executive. 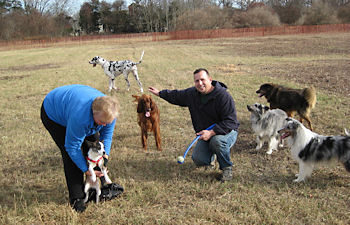 At the official opening of the dog park on the 14th, County Executive Levy also reiterated his support for dog parks. “Dog parks are great for allowing people and their dogs to get out, exercise and interact with other canines and their owners,” said Levy.”There will be more dog parks in Suffolk County.”

At the same time, the County Executive admitted there’s room for improvement at the new dog park. “It’s a beginning,” he said. “We can make improvements.”

LI-DOG and the South Yaphank Civic Association will urge the County to add more parking and expand services and amenities at the dog park in the coming weeks and months. 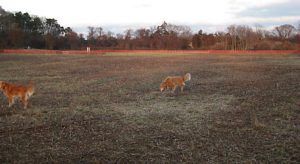 LI-DOG President Ginny Munger Kahn thanked the County Executive and the Parks Dept. for their good work on the new dog park. “It is a beautiful field, a good size and the fencing is attractive,” she said. “But this is only the beginning,” she added. The fencing, for example, needs to be closely monitored for integrity given the proximity of the dog park to Montauk Highway. The bottom line is “Dog parks provide real, daily quality of life improvements to thousands of dog-owning families,” said Munger Kahn. “It’s good to see the County continue to make progress on this initiative.”

Leg. Kate Browning is also supportive. “The key is there’s a place for families with dogs to go have fun and let their dogs run,” she said. “As long as the community is happy and it is successful, I’m glad that this is the dog park for this area.”

Dog owners who came to the ribbon cutting also were very happy. Several noted they’ve been waiting for a dog park in the area for years and that instead of driving miles to other dog parks in Suffolk County, they welcome this big, new dog park in their community.

Again, please let us know what you think by emailing us at lidog_news@yahoo.com.