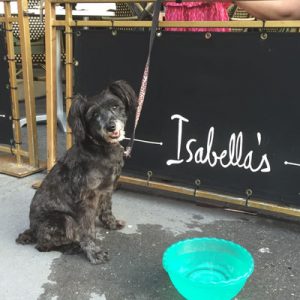 Hands and paws alike can be raised in triumph with the successful, and nearly unanimous, passing of the “Dining with Dogs Bill” (A. 5956 C/S 4327 A).  The popular bill, introduced and spearheaded by Assemblywoman Linda B. Rosenthal (D-Manhattan), sailed through the New York State Senate with a vote of 60-0 and the New York Assembly by 97-5.  Governor Cuomo signed the bill into law effective immediately late Monday evening, October 26, 2015, joining progressive canine inclusion laws enjoyed by dog lovers in California, Maryland, Florida, and North Carolina (which has even included cats in their outdoor dining statute).

The new law has been praised for its bipartisan support as well as its respect of pet parents’ wishes and establishment owners’ concerns.  Specifically, the law outlines the following regulations, leaving individual municipalities to provide more intricate protocol:

The law emphasizes that these new regulations are for companion animals and that service animals continue to enjoy their full rights to accompany human companions in other areas of the establishment. For those apprehensive about health code violations or safety concerns such as biting, the Journal of Environmental Health conducted a study in 2013, following the passage of California’s dog-friendly dining laws, and found no significant data showing a spike in either issue.

Assemblywoman Rosenthal, in campaigning for the passage of this bill, included Memoranda of Support from prominent New York and nationwide animal advocacy groups.  Among them, Social Compassion in Legislation, the organization that was instrumental in passing California’s canine companion law in 2012, whose President Judith Mancuso praised New Yorkers and Governor Cuomo for the progressive move.  The Long Island Dog Owner Group (LI-DOG), a long-time advocate and central organization for expanding the access of pet parents and canine companions to the treasures of Nassau and Suffolk county parks, proudly included a Memorandum of Support.HOW DO I ADD LINK TO PDF??  In the statement, President Ginny Munger Kahn summarized the overwhelming fairness of the bill to the wants and concerns of establishment owners and eager pet parents, citing the long-standing tradition of European cultures and more recently California, in allowing families to integrate their beloved dogs in social and recreational activities.

With hundreds of thousands of families boasting a furry, four-legged member, the new law is welcomed as a necessity for those who cannot leave their dog behind for a meal out.  We ask that you take a moment to thank Governor Cuomo  and Assemblywoman Rosenthal  for their efforts in making the “Dining With Dogs” bill a reality.  Please also continue to read our updates on legislation affecting our cherished family members so that you can be their voice to our elected officials.