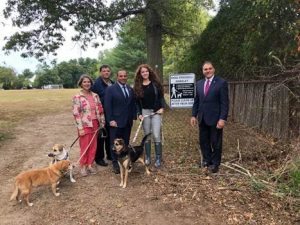 The Town of Oyster Bay made two big announcements in October that has tails wagging for resident dog owners: A pilot program for on-leash walking in 12 Town parklettes–small neighborhood parks; and the opening of the first dedicated dog park on the North Shore – at Centre Island Beach in Bayville.

On Tuesday October 8th, Supervisor Joseph Saladino and Councilman Steve Labriola met with local residents at the parklette off Split Rock Road in Syosset to kick-off this new initiative. Jill Hooey, a local high schooler and Girl Scout, worked with Councilman Labriola and Parks Commissioner Joseph Pinto to identify neighborhood parks where residents could walk their dogs on leash. Twelve parklettes have been identified for the pilot on-leash program:

Then, at a Ribbon Cutting Ceremony on October 16th, Supervisor Saladino, Councilman Labriola and Councilwoman Michele Johnson joined local officials and residents to officially open the dog park located at Centre Island Beach in Bayville. The dog park is the result of the efforts of local dog owners Joe Russo and Jen Jones who worked with Town officials to get the park sited and built. Key to getting the park created was a $100,000 grant obtained by New York State Senators Carl Marcellino and Jim Gaughran for the project.

The new dog park has separate areas for small dogs and large dogs and a wood-chip base. Water facilities are available on each side of the park. The dog park is close to a walking trail along Harbor Drive, which dog owners can also enjoy.

We hope everyone has fun in these new dog-friendly park facilities! Thanks to Oyster Bay  Town officials and local dog owners who made it  happen!