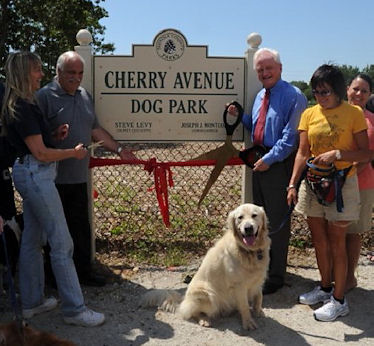 After months of anticipation, the Cherry Avenue Dog Park in West Sayville opened on August 4, 2011. Suffolk County Legislator Bill Lindsay of Holbrook declared the new 1.5-acre dog park officially open at a Ribbon Cutting Ceremony that included Suffolk Parks Commissioner Joe Montuori and LI-DOG President Ginny Munger Kahn. “The Sayville/West Sayville community and all Suffolk County have been looking forward to the opening of this dog park, and I am very proud to announce that this facility is now open,” said Leg. Lindsay. More than two dozen dog owners and their dogs attended the opening ceremony and inaugurated the new dog park!

To see photos from the dog park opening, go to the LI Dog Facebook page

The dog park is enclosed with 4-ft high chain link fence, has separate large dog and small dog areas– each with its own set of double-gates–and running water. The ground is covered by wood chips to keep down the dust and mud. In addition, there is parking for more than 30 cars and trash collection service will be provided. Dog owners are asked to bring their own dog waste disposal bags. The Parks Dept. has built two large PVC towers to hold donated bags.

The Cherry Avenue Dog Park is the third dog park created under the Five New Dog Parks initiative that LI-DOG championed and which was passed into law in 2007. “This new dog park would not have been possible without Leg. Lindsay’s support,” said LI-DOG President Ginny Munger Kahn. “Not only did Leg. Lindsay support the Five New Dog Parks initiative, but he is responsible for sponsoring the resolution that raised the money to make building this dog park possible, ” she said. These two actions have already, and will continue to have, “a daily, positive impact” on the lives of thousands of Suffolk County dog owners.

Ginny also thanked Suffolk Parks Commissioner Joe Montuori, Deputy Commissioner Tracey Bellone and the Parks Dept. staff for doing such a great job building the new dog park. The space is great, the fencing is durable and attractive, and there’s plenty of water for dogs and people!

Finally, Ginny thanked all her fellow dog owners for coming to the opening and showing how important the new dog park is to them and their dogs. “Your support and care for this dog park will be critical to its success,” she said. “Please know that LI-DOG is there to help in any way we can.”

Already, the Cherry Avenue Facebook group page has been created by dog owners who use the new dog park.

What more you can do: Thank Leg. Bill Lindsay and let him know how important this new dog park is to you and your dog at William.Lindsay@suffolkcountyny.gov or call 631-854-9611. Also, let Suffolk Parks Commissioner Joe Montuori and his staff know what a great job they have done at the Cherry Avenue Dog Park at scparks@suffolkcountyny.gov.

And, let us know if you have ideas for making the dog park even better at lidog_news@yahoo.com or share your ideas on the new Cherry Avenue Dog Park Facebook page!