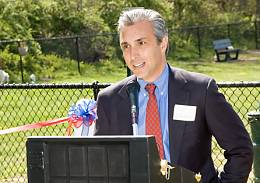 Close to 100 dog owners came to the new dog park on Sweet Hollow Rd. in West Hills County Park on Saturday May 5th to celebrate the opening of the new dog park and to thank Leg. Lou D’Amaro for his work on getting the new, bigger West Hills Dog Park built.
[For a description of each photo place your mouse cursor over it] Legislators Jon Cooper and Lou D’Amaro

The event was a big success! The weather was perfect-bright blue skies, temperatures in the 60s; the turnout was terrific; Legislators Lou D’Amaro and Jon Cooper came with their families and said great things about LI-DOG and dog parks in general; Deputy Parks Commissioner (soon to be Commissioner) Tracey Bellone spoke with many of our fellow dog owners and watched many dogs run and play in the new park; and the coffee, donuts, cookies-for both dogs and humans–and the big chocolate celebration cake were all delicious.
Lou D’Amaro throws the first Frisbee toss to celebrate the grand opening 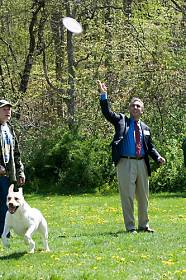 Among the people who contributed to making the event so great were Christopher Appoldt and Ray Medio, who took the terrific photographs that accompany this story; Pam Helldorfer, the manager of A Rise Above, the bakery in Huntington Village that made the delicious chocolate cake with cookies in the form of dogs and dog biscuits on top; Alan Michalak who brought his two Frisbee dogs for a fun demonstration; plus fellow dog owners Linda Tolmie who made the “Thank you, Leg. D’Amaro banner” and April Hamilton who designed the “I am an LI-DOG” caption and logo for the Kelly green bandanas worn by our dogs. The bandanas looked terrific! Also, we need to thank Emile at GeoTees who turned the bandana job around in one week!
Madison catches Lou’s throw! 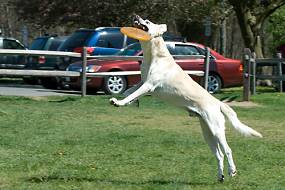 In addition, we need to thank our fellow dog owners who made the event such a success-Elga, Pia, Shannon, Arlyne, Scott, Ed, Sharon, Gina, Dee, Nora, Grace, Janette, Cara, Linda, and Liz. Thank you for contributing the coffee, donuts, cookies, cake, and drinks; thank you for tending the LI-DOG table; and thank you for watching the dogs to make sure there were no “incidents”.
A lot of happy faces at the ribbon cutting ceremony 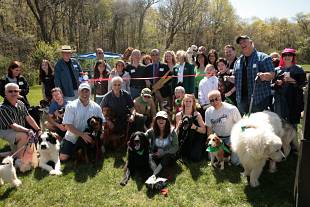 The opening was great fun, and there are more to come! At least five new dog parks will be created in the coming months as a result of a new law directing the Parks Commissioner to identify at least five new sites for dog parks on Suffolk County parkland.

Thank you to all our fellow dog owners for supporting dog parks!

To see more great photos from this event visit our online photo gallery at: http://groups.msn.com/LI-DOG/shoebox.msnw

As always, keep in touch by e-mailing us at lidog_news@yahoo.com.