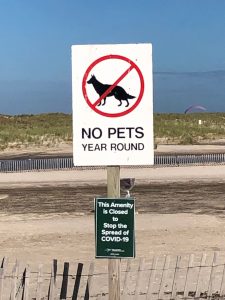 Let People Bring Their Dogs to the Beach

The Long Island Dog Owners Group (LI-DOG) has launched a campaign and online petition to get access to New York State beaches on Long Island. Long Island is surrounded by hundreds of miles of beaches, but the vast majority of this public parkland is off-limits to people with dogs.

The New York State Office of Parks manages 14,000 acres of Long Island parks that have shoreline access. Yet, NYS prohibits ALL access to New York State beaches on Long Island to people with dogs! LI-DOG’s petition on Change.org asks NY Governor Andrew Cuomo and NYS elected officials to lift the ban on dogs on LI beaches.

Denying access to so much recreational space to dog owners who pay taxes that support this public parkland is unacceptable. For many people, walking, running and playing with their dogs outdoors is their main recreational activity. People with dogs have the right to enjoy public parks and beaches just like hikers, bikers, joggers or anyone else.

New York’s ban on dogs on NYS beaches impacts tens of thousands of Long Islanders. It is estimated that 457,000 Long Island families have dogs. Because of New York’s longstanding, outdated policy, these families can’t take their dogs to the beach for exercise and recreation. Veterinarians, trainers and animal behaviorists agree dogs need exercise and socialization for their health and well-being.

The pandemic highlights that access to public parkland is a basic right and need—whether you have a dog or not. During the pandemic, attendance at Long Island’s public parks and beaches soared as people sought safety from the virus and freedom from isolation at home in outdoor spaces. In January, Gov. Cuomo said in his State of the State message that “the ability to safely recreate outdoors will remain a critical complement to public health measures for months,” but Parks officials on LI have closed off thousands of acres of public land to people with dogs.

The Office of Parks should work with LI-DOG to update its policies by designating appropriate beaches for people to take their dogs for exercise and recreation.

Let people bring their dogs to the beach!

What You Can Do NOW:  Sign the Petition on Change.org to Lift the Dog Ban on New York’s Long Island Beaches! Show elected officials how much support there is for allowing people to bring their dogs to the beach.

Once we reach our initial signature goal, we’ll go for more. The more signatures we get, especially from Long Islanders, the more likely we’ll get what we’re asking for—more access to beaches on Long Island!

Don’t forget, let people know WHY you’re signing the petition and what access to beaches means to you and your dog. Comments from individuals are a powerful way to strengthen our message!

We’ll provide updates on the petition, how we’re doing, and next steps soon. Feel free to get in touch with us at lidog_news@yahoo.com.

Thank you for supporting our campaign and online petition!